World History (9120)
World History explores selected topics in modern world history from the Age of Exploration to the world wars of the 20th century. It traces four important themes: 1. the interactions among world civilizations in the modern era; 2. the development of representative government, democratic citizenship, and individual rights; 3. the development of nation-states and nationalism; and 4. the growth of the economic and imperial power of the Western world. Students read critically as historians do, evaluate sources, place readings in historical context, and use primary sources to corroborate or challenge historical interpretations.

World History Honors (9130)
World History Honors is an exploration of the past that asks students to question and interpret the meaning and significance of events from selected topics in modern world history. Four themes are traced: 1. the development of representative government, democratic citizenship, and individual rights in the modern era; 2. the evolving relationship between society and the individual; 3. the development of nation-states and nationalism; and 4. the rise of Western global dominance. Honors students read and recognize a variety of approaches to writing history, including social history, cultural history, environmental history, and history of technology. They read critically as historians do, evaluate sources, place readings in historical context, and use primary sources to corroborate or challenge historical interpretations. Prerequisite – Teacher approval.

United States History I (9320)
This course is a chronological and topical study of U.S. history from the era of the American Revolution and early national period through the Progressive Era. Special emphasis is placed on the exploration of four key topics: 1. the study of the Constitution and on the development of the American political system; 2. the causes and consequences of the Civil War; 3. the social and economic transformation of American society in the post-Civil War period; and 4. origins of the United States as a global power in the late 19th century.

United States History I Honors (9330)
This honors course is the first half of a two-year, thematic exploration of the history of the United States. It begins with an in-depth study of the U.S. Constitution and explores the evolving Constitution and the role of law in shaping American society. Four topics receive special emphasis: 1. the study of the Constitution and on the development of the American political system; 2. the causes and consequences of the Civil War; 3. the social and economic transformation of American society in the post-Civil War period; and 4. origins of the United States as a global power in the late 19th century. Emphasis is on active engagement and in-depth analysis and discussion of historical questions using primary and secondary sources. Prerequisite – Teacher approval.

United States History I Advanced Honors (9340)
This course is designed to prepare students to take the Advanced Placement U.S. History test and is a prerequisite for placement in U.S. History II AP. The history of the United States is explored in depth, chronologically and conceptually, from the Colonial Period through Reconstruction. Special emphasis is placed on critical analysis of the past, interpreting primary sources, writing of critical essays, learning the techniques of the document-based essay, and class discussion. Prerequisite – Teacher approval.

United States History II (9420)
This course explores 20th century American society as it develops from World War I to the present. Students will read and interpret sources that explore the major social, economic, foreign policy, and political issues of the 20th century. Topics include the transformative impact of the Great Depression, American power on the world stage during World War II, the Cold War and related military and diplomatic entanglements, the post-war social and economic development of the U.S., the Civil Rights Movement, and the Women’s Movement.

United States History II Honors (9430)
This honors course continues the two-year thematic approach to American history with a special focus on “America in the world.” It traces the growth and development of U.S. foreign policy from the late 19th century through the challenges of America’s role in the world in the 21st century. Students are required to read and respond to a wide variety of challenging texts, so well-developed reading and writing skills are essential. Prerequisite – Teacher approval.

United States History II AP (9440)
This challenging course prepares students to take the AP exam in U.S. History. It includes an in-depth analysis of foreign and domestic affairs from the Gilded Age to the present. It emphasizes a critical reading and interpretation of historical documents, and an understanding of alternative interpretations of historical topics by leading historians and of changing historical interpretations over time. This course requires well-developed writing skills with the composition of analytical essays, document-based essays, and short research assignments as an important part of the course. The AP exam is offered in May each year. Dual Enrollment, which can earn three college credits through Seton Hall University’s Project Acceleration, is optional for this course. Prerequisites – U.S. History I Advanced Honors and teacher approval.

Global Issues (9525)
This semester course explores world issues in the 21st century and is designed to prepare students to become knowledgeable "global citizens." The course focuses on four special topics. The first is globalization and its benefits and challenges. The second is the origins of the conflicts in the Middle East and the rise of militant Islamism. Unit three examines the history of modern China and its rise in the 21st century. The last unit highlights issues vital to the social, economic, and political position of women in the global community. This elective is open to juniors and seniors.

Psychology (9620)
This yearlong course stresses the comprehensive study of human behavior and mental processes. The aim of the course is to broaden the student’s scope of understanding with respect to her own actions and the actions of others. To accomplish this, the following topics are discussed: subfields of psychology, research methods, nature versus nurture, human development, learning, states of consciousness, memory, intelligence, motivation and emotion, psychological disorders and treatment, and social psychology. Critical thinking is fostered through an emphasis on ethics in scientific research. Students learn to utilize American Psychological Association guidelines for formatting in writing.

American Law (9625)
This course exposes students to a wide variety of legal issues. The course begins with a brief overview of the three branches of government and the American court system. It includes the basic concepts involving crime and criminal justice (with a special look at the problems involving juvenile offenders); civil law and the various methods of resolving disputes between citizens; family law as it pertains to marital status, domestic violence, adoption, foster care and social services; individual liberties as provided by the Bill of Rights; and consumer law with respect to contracts, credit cards, and employment.

Sociology (9635)
Sociology is a one-semester course that focuses on the systematic study of social behavior, social institutions, and social change. Significant emphasis is placed on the interaction between individuals and culture. Topics covered in the course include socialization as it relates to the self, religion, gender, and technology; structure of society and social institutions (e.g. marriage); social networking; and social inequalities (class, gender, and race). Students critically evaluate social stability in change through history, modern research, and current events. This course provides a solid foundation for the study of sociology in college.

AP Comparative Government (9540)
In this yearlong advanced placement course, students compare and contrast the political structures and institutions of six case-study nations: Great Britain, Mexico, Russia, Iran, China, and Nigeria. Students are introduced to the discipline of comparative politics and explore topics that include issues of sovereignty, the exercise of power, comparative political institutions, and the relationship of the citizen to society and the state. This elective is open to seniors. The AP exam is offered in May each year. Prerequisite – Teacher approval.

AP Psychology (9640)
This yearlong advanced placement course is intended to prepare students for the Advanced Placement exam in psychology. In accordance with American Psychological Association and College Board standards, the course introduces students to the systematic study of human behavior and mental processes equivalent to a college level introduction to psychology course. Students learn basic psychological principles and phenomena through the study of the major subfields of psychology including: biological basis of behavior, development, learning, states of consciousness, memory, sensation and perception, intelligence and language, emotion, motivation, psychological disorders, and social psychology. Research methods and ethics in psychological research are also covered. Strong emphasis is placed on critical thinking through primary source reading and scientific writing. Students learn to utilize American Psychological Association guidelines for formatting. This elective is open to seniors. The AP exam is offered in May each year. Dual Enrollment, which can earn three college credits through Seton Hall University’s Project Acceleration, is optional for this course. Prerequisite – Teacher approval.

Genocide and Film Studies (9725)
In this course, students explore mass violence and genocide through film. They examine the questions of what enables individuals collectively and individually to perpetrate mass violence and genocide, as well as examine the impact of apathetic bystanders. Genocides to be studied include the Armenian genocide, the Holocaust, the auto-genocide in Cambodia, the Rwandan genocide, Indigenous genocides, and imperial famines such as in Ireland and in the Ukraine. This is a project-based course in which students, through individual creative projects, will explore our capacity for hating and marginalizing others, as well as our ability to overcome and transform hatred. 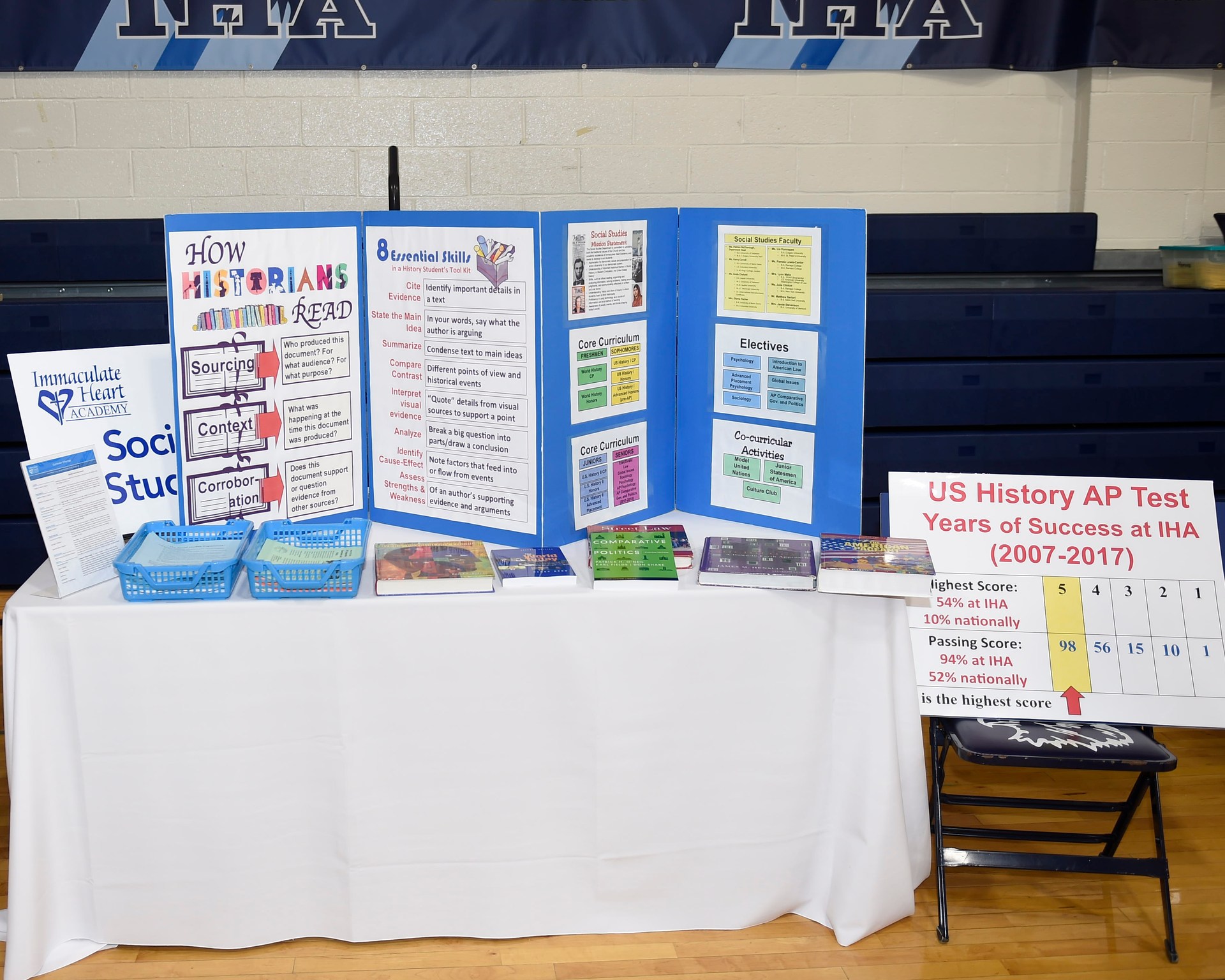