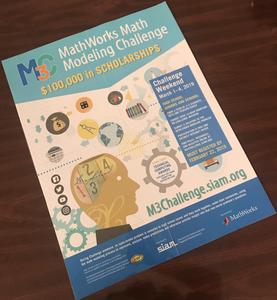 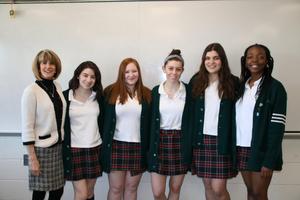 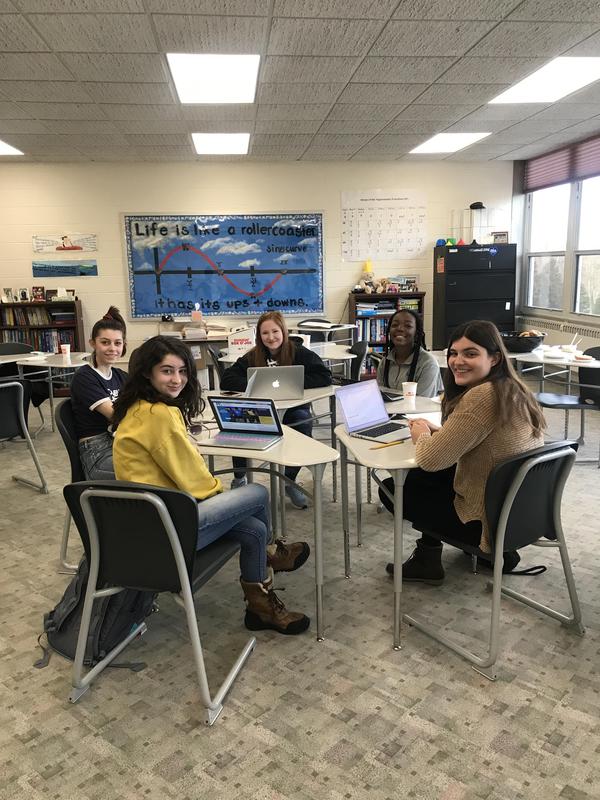 On March 3, 2019, a team of five students and three alternates represented Immaculate Heart Academy in the national MathWorks Math Modeling (M3) Challenge.
This rigorous, fourteen-hour competition is unlike any other high school competition in mathematics, pushing junior and senior students to the limits of their math knowledge and testing their ability to work together as a team.

Using the math modeling process, 877 teams across the globe addressed a complex, real-world problem, akin to those problems faced by professional mathematicians working in the industry. This year’s problem prompted students to create a mathematical model to predict the spread of nicotine use due to vaping over the next ten years and compare vaping to cigarette use. Students had to build a second model to simulate the likelihood that a given individual will use a given substance, taking into account social influence and character traits as well as characteristics of the drug itself, and predict how many high school seniors will use these substances. They were then tasked with developing a metric to measure and rank the impact of the use of various substances.

The team prepared a technical report of about twenty pages that presented the problem and proposed a solution. Team members then presented a defense of the solution and the mathematical model used, and included a “sensitivity analysis” that explored the strengths and weaknesses of their models and explained what they have learned.

After two rounds of judging by professional applied mathematicians, the IHA team’s solution was selected to receive one of only twenty-two Honorable Mention awards, chosen out of 877 teams in total. Only four percent of the submitted papers were selected for recognition.

Each Honorable Mention award-winning team is presented a scholarship prize in the amount of $1,000, to be divided equally among the team members. The individual amounts will be paid directly to the colleges or universities at which the winning students ultimately enroll. About thirty-five teams were recognized with scholarship prizes in total, with the champion team receiving $20,000. Each year, the Challenge awards scholarship prizes totaling $100,000.

Mrs. Elizabeth Kearns, Mathematics Department chair and Mu Alpha Theta advisor, served as the coach of the IHA Math Challenge team. She was thrilled that the girls who competed had the opportunity to work collaboratively on a real-world problem that their generation is presently facing. “This experience was invaluable and offered them a different perspective from classroom mathematics,” she said. “They were able to see the power of mathematics in the real world and how much good they can do for others by sharing their gift and love of mathematics. I could not be more proud of the efforts these impressive young women put into this competition. I commend the team for the courage and grit it takes to compete against some of the top schools and most talented math students in the country. And to receive Honorable Mention in our first year competing, I’m ecstatic! I am already looking forward to next year.”

Click here to see a video the team submitted for the post-contest Video Challenge, documenting their day in under two minutes.