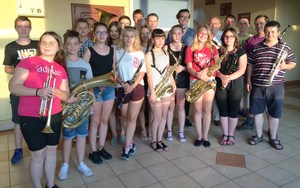 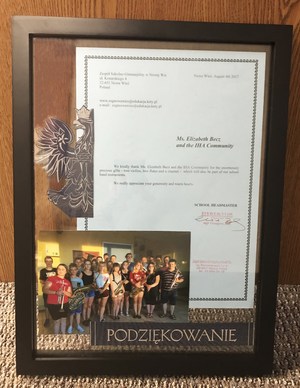 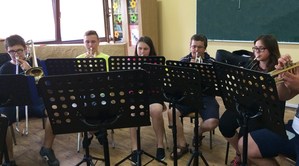 Elizabeth Becz’18 has creatively utilized her passion for music to bridge the gap between her Polish and American cultures.

After visiting Zespoł Szkolno-Gimnazjalny w Nowej Wśi, a school in Poland, her sophomore year, Elizabeth discovered the students’ access to music was extremely limited. She decided to do something about it.

Elizabeth, who has played the piano since she was nine years old, describes music as much more than just a hobby. “I've used it as a way to anchor myself throughout my entire life,” she said. She also feels very connected to Poland, as her whole family except for her parents and sister, Helen Becz’07, still live there. Making it her mission to bring accessibility to music to the students in the Polish school, Elizabeth created a nonprofit organization called School Supporters.

At first, Elizabeth said she didn’t know what to expect or where to begin. “I knew that I wanted to help the school’s music program out in some way, but I didn’t really know what I was getting into,” she said. “Walking in and seeing the barren music room was heartbreaking. I can’t imagine where I’d be without my instrument. There had to be kids in the school that would have the same reaction to music as I did, and I wanted to give them the opportunity to discover it. That’s how School Supporters started."

During her sophomore year, Elizabeth managed to raise a substantial amount of money for the music program at Zespoł Szkolno-Gimnazjalny w Nowej Wśi. “Initially, I had an IndieGoGo page going as well as a physical collection point for old instruments,” she explained. “We raised around $1,000 and sent the money directly to the school. They used it to buy instruments for their brass orchestra."

Once Elizabeth became vice president of IHA's Tri-M (Modern Music Masters) Honor Society, she used her role as a platform to hold additional fundraisers. At a bake sale, she and her peers raised enough money to buy an additional trumpet for the school. At Tri-M Open Mic Night, enough money was collected to purchase two violins, two flutes, and a clarinet.

In the summer of 2017, Elizabeth visited Poland to deliver the instruments; she witnessed first-hand how her generosity and hard work had such a great impact on the Polish students.

“Bringing the instruments to the school was awesome,” Elizabeth said. “By this summer, there was a complete brass band that was playing for the school, and it felt good to know that School Supporters was a part of making that happen. I managed to sit down and hear them all play a set that they were preparing for their Christmas concert. I’m so grateful to the students at IHA for supporting and being a part of these efforts!”

Find out more about School Supporters at www.schoolsupporters.org.