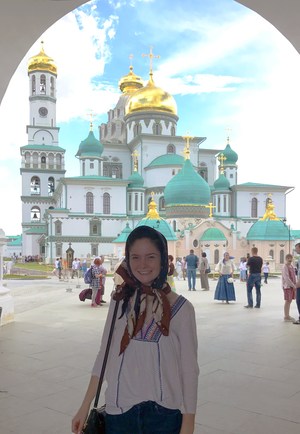 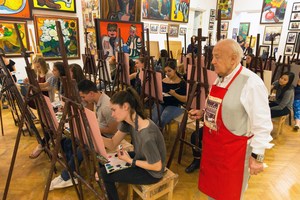 This time last year, Caroline Quill’18 did not expect to spend the majority of her summer in Russia.

But after she was awarded a prestigious National Security Language Initiative for Youth (NSLI-Y) scholarship by the U.S. State Department’s Bureau of Educational and Cultural Affairs, that’s exactly what she did.

Caroline is one of only about six hundred competitively selected students from across the country who received a scholarship to study Arabic, Chinese, Hindi, Korean, Persian, or Russian overseas. After attending a three-day orientation in New York City, Caroline spent six weeks in Moscow, from June 22 to August 5, 2017. During the week, she lived in the dorms of the Bolshoi Ballet Academy and on the weekends she lived with Russian host families from the greater Moscow area.

“I was extremely excited to go to Russia at such a dynamic political time!” Caroline said. “After reading about Russia in the news so much over the past year, I thought that it would be interesting to explore the Russian perspective of events.”

The NSLI-Y program is part of a multi-agency U.S. Government initiative launched in 2006 to improve Americans’ ability to communicate in select critical languages to advance international dialogue and increase American economic global competitiveness. The goals of the NSLI-Y program include: promoting critical language learning among American youth; enhancing cross-cultural understanding and deepening trust; sparking a lifetime of interest in foreign language and culture; and developing the skills to advance international dialogue, compete effectively in the global marketplace, promote mutual understanding, and contribute to a more peaceful world.

While in Russia, Caroline received four hours of formal Russian language instruction each day, in addition to informal language practice. “This intensive immersion environment allowed me to develop my language skills far beyond what I could have done in the classroom,” she said. “I went from being a complete novice of the Russian language to achieving intermediate-mid level proficiency on my post-program oral proficiency interview (OPI).” Almost every morning, Caroline and two friends went for a run before 6 a.m. She said some of her favorite memories are of the early mornings they spent running along the Moscow River, when it seemed they had the whole city to themselves.

“We would get coffee at the same place every time we finished a run—the only one that was open,” she said. “By the end of the trip the baristas knew our coffee orders and names, which really made me feel like we had immersed ourselves in the community.”

“One of my favorite professional meetings was when my NSLI-Y group of fourteen American students had the incredible opportunity to take a private painting class with Zurab Tsereteli, a renowned painter, sculptor, architect, and billionaire,” Caroline remembered. “I was recently scrolling through my Instagram feed and saw that the United Nations posted a picture of his ‘Good Defeats Evil’ sculpture. It was presented by the Soviet Union in 1990 to the United Nations and is presently displayed at the U.N. headquarters in New York City. Painting with him was truly an unforgettable experience.”