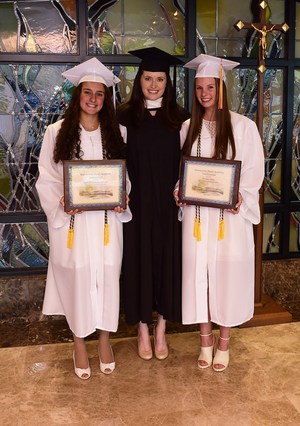 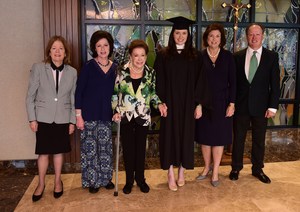 We were honored to welcome back Elizabeth Higgins Clark, IHA Class of 2002, as our 2017 Commencement Speaker.

Elizabeth’s association with Immaculate Heart Academy began well before she was even born. Her mother, author, Mary Jane Behrends Clark, graduated in 1972, while her aunts, The Honorable Marilyn Clark’68, Carol Higgins Clark’74, Margaret Behrends’75, and Patricia Clark’76, were also IHA graduates. Elizabeth’s great aunt, June Clark, is a former IHA faculty member, and her grandmother is renowned author, Mary Higgins Clark, a longtime supporter of our school after whom our Writing Center is named. While a student at IHA, Elizabeth was a member of the Forensics Club, ITS, CARE, Communication Club, and Mock Trial. She was also a member of the Student Council and played on the IHA Softball team.

After graduating from IHA, Elizabeth attended Providence College where she received a B.A. degree in English literature and minored in women’s studies. She is an actor who has appeared on shows such as “The Mindy Project” and “Criminal Minds” and on stage at The Williamstown Theatre Festival and La MaMa E.T.C. Elizabeth has written for Maria Shriver’s website and The Huffington Post, with her article about the “R word” making the front page of the entire blog. At fundraisers and genetics counseling facilities, Elizabeth has spoken about her brother, David, who suffers from Fragile X Syndrome. She recently wrote her first play, FRACTURED, which led Rolling Stone critic Peter Travers to call her “lavishly talented.” But her message to the Class of 2017 was not about her success or the careers they may pursue after college. Instead, her focus was simply on the power of kindness.

“Your greatest power lies in the one thing you are in total control of for the balance of your life,” Elizabeth proclaimed to the graduates, “and that is how you choose to treat the people you encounter as you live.” She reiterated that there is no greater legacy than treating people well. “Kindness may not make you rich or win you awards, but its ripples will reach others in ways you can’t even imagine. It’s what the people who actually know you will remember most.”

Elizabeth concluded her speech by telling the Class of 2017 that she’s confident they will work hard and achieve. “I have no doubt you’re going to do well,” she said. “But because you’re IHA girls, I also have faith that you’ll take the time to do good.”