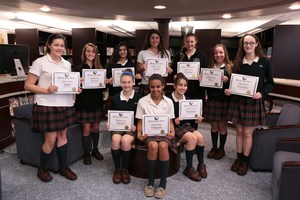 The Soaring Eagle Award is presented quarterly by Jason Schlereth, principal, to students who demonstrate excellence and work to the best of their ability in a particular subject.
After being nominated by a teacher, the Quarter Four Soaring Eagle Award recipients were recognized at a special presentation and reception on June 2, 2017.

Click to see the nomination video and full photo album from the Soaring Eagle Awards Reception.