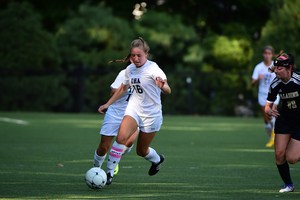 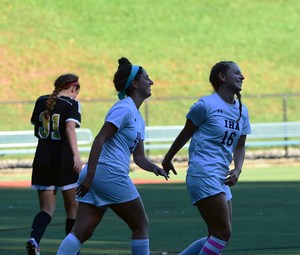 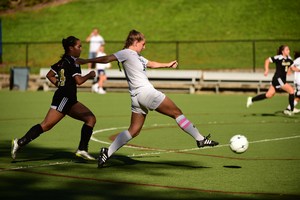 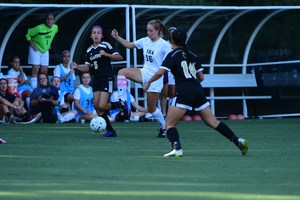 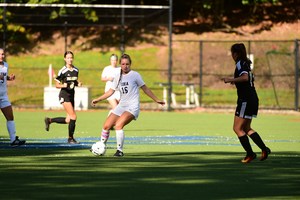 2016 proved to be a great year for Julianna Shrekgast’17’s soccer career.

In December, not only was she named First-Team All-League, First-Team All-County, The Record First-Team All-North Jersey, and The Star-Ledger Second-Team All-Non Public, but she was also notified that she would be recognized at the New Jersey Girls Soccer Coaches Association (NJGSCA) award dinner. To her surprise, Julianna was acknowledged with three state-level awards at the banquet held on January 23, 2017: First-Team All-State, a Top 20 Regional Player, and a Top 20 State Player.

When she received the state awards, Julianna said she was shocked. “I have to admit that I was surprised because I had no clue about them,” she said. “But I was more honored and grateful for not only being recognized as such a standout player by the NJGSCA, but more specifically, by coaches other than my own. It was truly the best way to finish off my high school soccer career.”

Julianna began playing soccer when she was just four years old. The talent she showed at her first YMCA soccer practice was telling of her future. “The coach approached my mom afterward and told her that he saw something very special in me and that I had a lot of potential as a soccer player,” Julianna remembered. “From that day on, my soccer career began and I never looked back!"

A four-year member of Immaculate Heart Academy’s varsity soccer team, Julianna was the only freshman chosen to be on varsity that year. She played forward on the IHA team, and left-midfield on her club team. In addition to the state awards, Julianna was named to the 2016 NSCAA High School All-East Regional Team in December. This team is comprised of the top sixty high school players from New Jersey, New York, and Pennsylvania.

Juilianna will attend and play soccer at Cornell University in the fall. She was offered a spot on the team in February 2016; verbally committed to play for Cornell on July 7, 2016; was accepted in December; and participated in the National Signing Day this past February. The Cornell coach has seen her play at both left-midfield and forward. He likes her one-on-one abilities when she dribbles the ball down the left flank of the field, in addition to her hunger for the goal when she plays forward. Because of those reasons, Julianna believes she will be a versatile player at Cornell, most likely with playing time at both of those positions.

When she was twelve years old, Julianna told her parents she wanted to play Division 1 soccer at an Ivy League university. Although they knew it was an ambitious goal, they also knew that when Julianna sets her sights on something, she will do anything and everything in her power to achieve it. “When I read the first word, ‘Congratulations!’ on my Cornell acceptance letter in December, I teared up. At that moment, I envisioned my twelve-year-old self and how happy she would be for me for having worked so hard to accomplish her goal.”

At IHA, Julianna is a member of the National Honor Society, Spanish Honor Society, Science National Honor Society, St. Brigid Society, and the Business Club. She said IHA has truly shaped her into the determined and competitive young woman she is today—both on and off the field. “Playing for Coach Silva these past four years, I have developed an inner fire that never ceases to ignite when I am on the soccer field,” she said. “Also, having been challenged by such brilliant teachers, I have become a critical thinker who approaches problems with an open mind. I will miss this school’s ability to constantly push me to grow and to be better than I was the day before.”