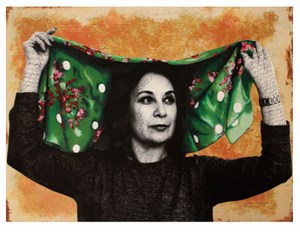 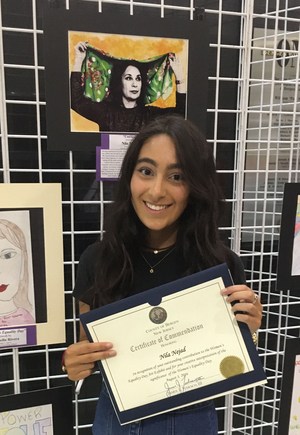 Nila Nejad, a graduate from IHA's Class of 2016, was recognized for her thought-provoking artwork at a reception sponsored by the Bergen County Commission on the Status of Women.

The exhibit was on display in the lobby of the Bergen County Administrative Building in Hackensack throughout August to include the commemoration of Women’s Equality Day on August 26, 2016. The observance of Women’s Equality Day commemorates the passage of the 19th Amendment to the U.S. Constitution and calls attention to women’s continuing efforts toward full equality.Nila’s piece of art depicts an image of her mother taking off the hijab, which all Iranian women must wear above the age of

Nila’s piece of art depicts an image of her mother taking off the hijab, which all Iranian women must wear above the age of twelve when in public. While describing her piece, Nila said, “My piece depicts the strength and determination that women have when fighting for what they believe in. The scarf on a women’s head represents the inequality between Iranian women and men. By capturing the motion of my mother, an Iranian woman, taking off the green scarf, I am able to show women’s struggle for equality. Written in Farsi on my mother’s hands and face, is Iranian poetry by Forough Farrokhzad. These poems tell of women’s feelings towards the law and its’ unjust actions towards women in Iran.”