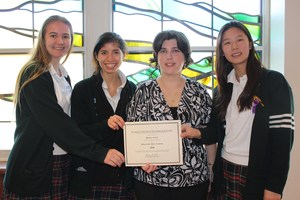 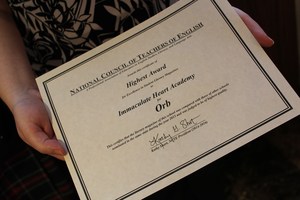 Immaculate Heart Academy's literary magazine, Orb, recently received the rank of Highest Award in the 2015 National Council of Teachers of English (NCTE) Program to Recognize Excellence in Student Literary Magazines (PRESLM).
As the certificate states, "This certifies that the literary magazine of this school was compared with those of other schools nominated in the same state during the year of 2015 and was judged to be of highest quality." IHA’s literary magazine was ranked number one in the state of New Jersey, and was one of only 24 magazines throughout the entire country to receive the Highest Award ranking.
Congratulations to Orb moderator and English teacher, Mrs. Michelle Mathews, and the entire Orb staff on this spectacular achievement.
Click here to see the other ranked magazines within the state of New Jersey.
Print