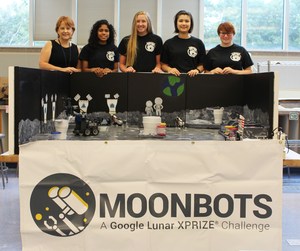 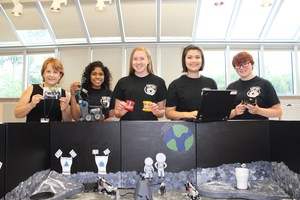 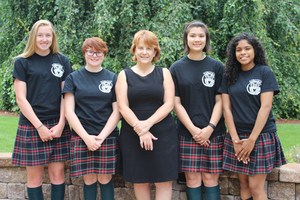 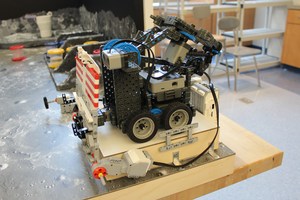 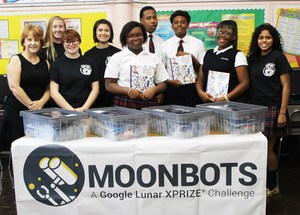 The Robotics Team at Immaculate Heart Academy was recently selected as a “top thirty finalist” in the Google Moonbots competition, a Google Lunar XPRIZE® Challenge. IHA’s Team Artemis was selected from a field of more than two hundred and fifty teams, located in twenty-five countries around the globe. As a finalist, the IHA team won a free Vex IQ Clawbot robot that the team members programmed for a chance to be named one of three winners.
To take part in the competition, the team, led by Mrs. Sharon Tassely Mistretta’75, IHA Robotics Club moderator and technology teacher, constructed a 6 ft. x 6 ft. Lunar Landscape as a platform for their new robot, built and programmed the robot and documented its game strategy to the Google organization.

As part of Phase II of the Google Moonbots competition, the Robotics Education & Competition Foundation provided the team with four additional robots to be donated to “an independent organization or institution that looks after socially vulnerable children.” Team Artemis chose Sacred Heart School in Jersey City, N.J., a school with which IHA has an established relationship. Students within Immaculate Heart’s Campus Ministry program volunteer regularly with Sacred Heart School, and Team Artemis also worked with the school through a special Phase I activity.

As part of Phase I, the team was required to create and produce an original “Moon Tale” to educate viewers about the moon. Team Artemis wrote the script, drew the images, scanned the original artwork and created an iMovie with voice-overs to narrate the tale, entitled “The Impossible Astronaut.” Sacred Heart students viewed the tale and provided feedback of what they learned, which was documented and uploaded to the Phase I Google Moonbots Artemis Team webpage. On Aug. 18, Team Artemis presented the four Vex IQ Clawbot robots to students at Sacred Heart School; the team will return in the fall to teach students how to build and program them.

On Aug. 20, Team Artemis conducted a STEM Outreach Event, a requirement of Phase II of the competition. The team invited the public to view the lunar landscape and programmed game performed by the Vex IQ Clawbot robot. Team members, including Rebecca Coronel’16 of Ringwood, N.J.; Carmela Stone’16 of Fairlawn, N.J.; Megan Twiss’16 of Mahwah, N.J.; Olivia Canterella’18 of Closter, N.J. and moderator, Mrs. Sharon Mistretta, provided a detailed explanation of the Science, Technology, Engineering and Math concepts that were studied and implemented during this process.

“The only time that you should separate the subjects of Science, Technology, Engineering and Math is when you are explaining the acronym,” Mistretta said at the outreach event. “It becomes evident as you work with the Vex Robot that robotics is the glue that holds STEM together.” This was the inaugural year for the IHA Robotics Club, an extracurricular activity added as part of Immaculate Heart’s impressive STEM program, introduced in the 2014-15 school year.

The Google judges will be holding a live webcast to interview the team and witness the robot in action on September 3. Google judges will then review the results of all thirty teams and announce the three winning teams by September 15.
“The prize is a trip to Japan for the team to witness the real Google XPrize Robots that are being constructed by teams such as NASA,” Mistretta said. “This is a very exciting competition for our Robotics ‘Go Team,’ who are all very interested in technology majors in college and engineering careers in the future.”
Click here to see Team Artemis' Google Moonbot website.
Print