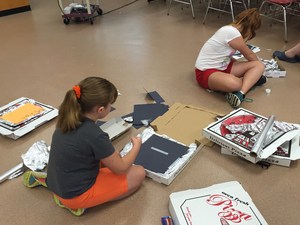 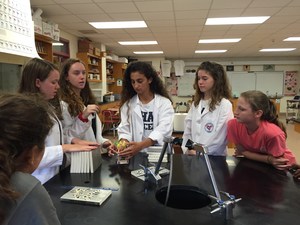 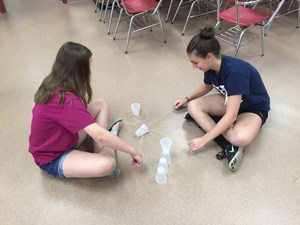 Immaculate Heart Academy students, Eilis McLaughlin’18 and Maeve Kelly’18, created a series of fun activities for IHA’s inaugural G.E.N.I.U.S. @theheart summer program.
This camp, which was completely student-run, encouraged the sixth through eighth grade campers to become excited about science. Activities included an egg drop, building a roller coaster, making and using solar ovens, and baking cake pops. Other unique activities focused on the girls' creativity and engineering skills like a marshmallow challenge. The girls used uncooked spaghetti, tape, and string to build the tallest standing structure that can support a marshmallow on the top. All of these projects exposed the students to a wide range of science topics including chemistry, engineering, and math.

The IHA students who ran the program planned everything for the G.E.N.I.U.S. @theheart classes. They purchased all of the materials and even reflected on their work by asking for feedback from the campers. IHA science teacher, Ms. Lauren Fitzgerald, said they were very enthusiastic and created a program she hopes will be around for a long time. She is immensely proud of the IHA students who worked to make this program a success.

During the two sessions of G.E.N.I.U.S. camp, Ms. Fitzgerald said she noticed how uninhibited the campers were. “While they followed a schedule of activities, the projects encouraged more creative thinking as opposed to following a set protocol,” she explained. “If children, especially girls, are exposed to the creative side of science early on, then it will change the way they look at the world as they grow.”

In addition to Eilis and Maeve, other helpers included Heather Farrell’18, Marissa Amen’18, Isabelle Souza’18, Fiona Ralph’18, Catherine Petretti’18, Cassandra Mitsinikos’18, Bridget Dimaano’18, Sarah McLoughlin’18, and Emily Koehne’18. They not only worked one-on-one with the campers, but they enthusiastically took control of the program and organized the projects every day. “These young ladies are the epitome of an IHA student because they work with one another to share their passion,” Ms. Fitzgerald said. “I am very lucky to have them as my students!”