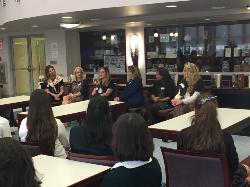 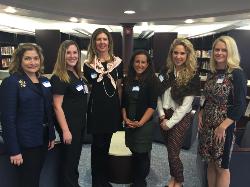 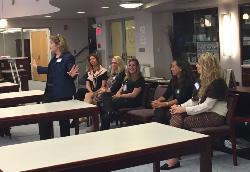 On March 26, 2015, the 55 sophomores of the St. Brigid Society heard from a career panel made up of six successful and inspiring alumnae.
The IHA graduates represented a variety of industries, from healthcare and nutrition to media and cosmetics. The following alumnae shared their career backgrounds and advice with the IHA students:
Laura Coti Garrett’75, member of the IHA Consultative Board, is a Registered Dietitian-Nutritionist and diabetes educator who specializes in diabetes, cardiovascular disease, and the glycemic index. Laura is also the owner of Realtime Nutrition, a food marketing, communications, and consulting company. Laura is a member of the Academy of Nutrition and Dietetics and the American Association of Diabetes Educators and recently wrote her first book, “Busy Morning.
Colleen Jennings’84 is a sales and business development professional who has been in the cosmetic and personal care manufacturing field for the past fifteen years. Over that time, she has collaborated with marketers to bring cosmetic and personal care products from concept to finished goods to retailers. She is currently the sales manager for Kolmar Laboratories, the industry leader in cosmetic and personal care formulating and manufacturing.
Erin Hiner Gee’91 is an Emmy Award winning network news director with almost twenty years of experience working in the national media. As a member of the Directors Guild of America, Erin has produced and directed live on-air graphics for the CBS News with Scott Pelley for the past five years. She provides strategic visual, technical, and conceptual guidance as the leader of a large graphic design team. Erin is also a member of the CBS News live production team and supported all major breaking news events since 1998, having worked on all of the CBS network news broadcasts.
Christina Stella’04 received a B.S. degree from The American University where she studied health promotion. After deciding to change career paths, Christina decided to become a Registered Dietitian. She completed her master’s degree and dietetic internship at New York University and now works at Memorial Sloan Kettering Cancer Center as an adult and pediatrics outpatient dietitian. She also owns Stella Premium Nutrition, a private practice specializing in weight management and metabolic disorders.
Shannon Hall’06, sister of Mary Kate Hall’16, attended NYU and graduated from the College of Nursing in 2010 with university honors. She began her career as a pediatric intensive care nurse at St. Joseph’s Regional Medical Center, and after two years, furthered her experience at Columbia Presbyterian Children’s Hospital. In 2013, she left Columbia to join a team of nurses and doctors to open the first Pediatric ICU at Memorial Sloan Kettering Cancer Center. There, she enjoys her work as a bedside nurse and a Pediatric Advanced Life Support Instructor. She is marrying her fiancé, Bobby, this June, and plans to return to school for a degree as a nurse anesthetist this winter.
Kristina Bruzzesi’12 has been an Emergency Medical Technician for six years. She holds several certifications in International Trauma Life Support, Advanced Cardiac Life Support, and Emergency Management/Incident Command Systems. She has received several “Life Saving” awards, including two CPR saves, as well as other awards for her excellence in and dedication to emergency medical services. She also works at Hackensack University Medical Center on a postpartum floor with newborn babies and their moms and at the Bergen County Jail with inmates in the medical unit. Upon completion of her program, she will be a registered nurse in June of 2016.