Harpists to Visit/Perform at IHA 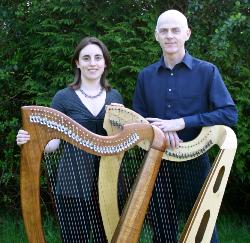 On April 13, 2015, IHA will welcome two world-renowned harpers to join us for the day. Gráinne Hambly of Ireland and William Jackson of Scotland, a married couple also known as "The Masters of Celtic Harp," will spend the day at Immaculate Heart Academy for an in-school field trip and evening concert.
During the in-school field trip, Hambly and Jackson will offer various workshops to the music, theater, and art students. Additionally, Jackson, who is also a music therapist, will offer guidance to any student interested in music therapy as a career.
Hambly and Jackson are two of the foremost harpers of Ireland and Scotland. Combining their extraordinary talents on harp as well as concertina, tinwhistle, and bouzouki, the two harpers have been performing all over the country and dazzling audiences with their artistry. Hambly and Jackson teamed up and began touring as "The Masters of the Celtic Harp" in 2005 and have been traveling together ever since. They now live outside of Claremorris in County Mayo.
At 7 p.m. on April 13, the two harpers will perform a concert in IHA’s Information Commons. Hambly and Jackson will play two 45-minute sets and refreshments will be served. Tickets are $8 pre-paid and $10 at the door. For more information and to purchase tickets, please click here.
Print