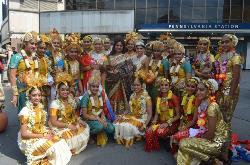 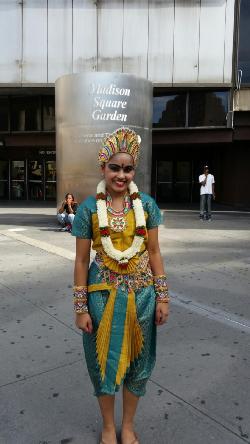 On Sunday, September 28, 2014, Christine Jacob’17 was given the opportunity to perform a traditional Indian dance in front of India Prime Minister, Narendra Modi, during his visit to New York City.
Christine performed at Madison Square Garden with 24 other senior girls from Kalashri School of Arts based in Parsippany, New Jersey. They created a special routine just for this event, where Modi was welcomed by about 20,000 people.

Christine has been practicing traditional Indian dance since she was four years old and has been a student at Kalashri for about four years. She has studied other forms of dance, but recently decided to focus purely on her favorite genre—Indian dance.

On the day of the event, Christine and her fellow dancers stayed overnight at their dance school to practice and get dressed in their traditional Indian garb. Once they arrived at Madison Square Garden, the group blew onlookers away with their six minute performance.

Christine said she had a wonderful time and it was a great experience. She hopes to continue traditional Indian dance for a long time to come.

“There are three main forms to learn, and I have reached my second one,” she said. “But I plan on continuing to dance through high school and then hopefully in college too.”
Print