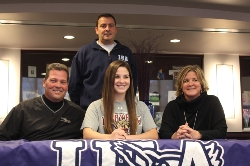 The Gatorade Company, in collaboration with USA TODAY High School Sports, announced Steph Thomas of IHA as its 2013-14 Gatorade New Jersey Softball Player of the Year. Steph is the third Gatorade N.J. Softball Player of the Year to be chosen from IHA.
The award, which recognizes not only outstanding athletic excellence, but also high standards of academic achievement and exemplary character demonstrated on and off the field, distinguishes Steph as New Jersey’s best high school softball player. Now a finalist for the prestigious Gatorade National Softball Player of the Year award announced in June, Thomas joins an elite alumni association of past state award-winners in 12 sports.
The 5-foot-4 senior right-handed pitcher owned a 30-1 record and a 0.50 ERA in the circle for the Eagles (30-1) at the time of her selection. Through 31 games, Thomas fanned 271 batters and issued just 16 walks in 181.2 innings pitched. A returning Third Team All-American as named by the National Fastpitch Coaches Association, Thomas owned a .525 batting average with 13 extra-base hits and 22 RBI entering the Non-Public A, North championship game. She owns state records for career victories and shutouts.
Thomas has maintained a 4.19 GPA in the classroom. A member of Immaculate Heart Academy’s student council, she has also served as a student ambassador as well as the senior class event coordinator. She has volunteered on behalf of her church, a local retirement facility and Christian Actions Reaching Everyone programs in addition to donating her time as a youth softball instructor and fundraising to benefit the Memorial Sloan Kettering Cancer Center.
Thomas has signed a National Letter of Intent to play softball on scholarship at Lafayette College this fall.
Read more on the official Gatorade website here.
Print