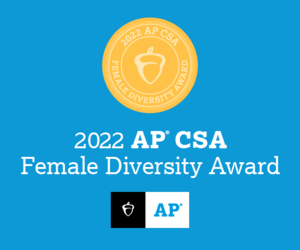 At IHA, this course is taught by Mrs. Theresa Seymour Dolan’95 P’26.

Mrs. Dolan said the school community as a whole is honored by this recognition. “As a teacher, I could not be prouder of the commitment and enthusiasm our students have demonstrated in their study of AP Computer Science,” she continued. “I can’t wait to see their passions lead to lifelong success as computer science and STEM professionals.”

The winners represent a broad range of high schools from across the country and around the world. They include private, public, and charter schools, large and small student bodies, rural and urban populations, and specialized high schools, along with generalized programs.

Schools receiving the AP Computer Science Female Diversity Award have achieved either 50% or higher female exam taker representation in one of or both AP computer science courses, or a percentage of female computer science exam takers that meets or exceeds that of the school’s female population.

“Computer science is the source code of our economy and so much of our daily lives,” said Trevor Packer, College Board Head of the AP Program. “In the five years since we began the AP Computer Science Female Diversity Award, it’s been heartening to see schools like IHA welcome so many more young women into this vital field.”

Providing female students with access to computer science courses is critical to ensuring gender parity in the industry’s high-paying jobs and to drive innovation, creativity, and representation. The median annual wage for computer and information technology occupations was $97,430 in May 2021. However, women represent just 24% of the five million people in computing occupations.

According to a Google study, 54% of female computer science majors took AP CSA in high school. College Board research finds that students are nearly twice as likely to enroll in AP CSA after taking AP CSP.