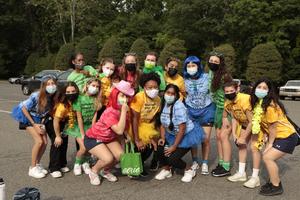 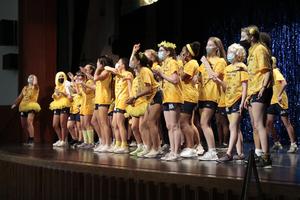 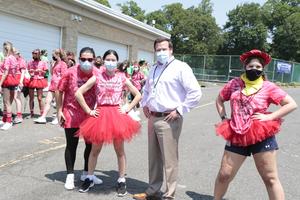 The Class of 2023 had a blast at this year's Sophomore Spirit Day on May 26, 2021.
Members of the Class of 2023 enjoyed a Disney-themed Sophomore Spirit Day, representing four teams: Yellow Team (Epcot), Blue Team (Magic Kingdom), Green Team (Animal Kingdom), and Red Team (Hollywood Studios).
Sophomores kicked off the morning with a bagel breakfast outside then headed into the PAC for Jeopardy, Teacher Baby Picture Match, Name that Tune - Disney Edition, and Team Pictionary. The Class of 2023 then went out to the field to play Tug of War, Water Balloon Toss, and have a Scavenger Hunt. Their fun day continued with a Sing-Off in the PAC, where the yellow team was named the winners of the day and led their classmates in singing the IHA Alma Mater. The day concluded with a Ben & Jerry's ice cream truck party!
Thank you to the IHA Administration, faculty and staff volunteers, and especially Ms. Maureen McNulty, sophomore class moderator, for planning a great day for the Class of 2023.
Click here for the full photo album, courtesy of Patrizia Tersigni, Berta Roldan, and Tara Hopfenspirger. Click here for a video recap, courtesy of Jessi Shaheen.
Print