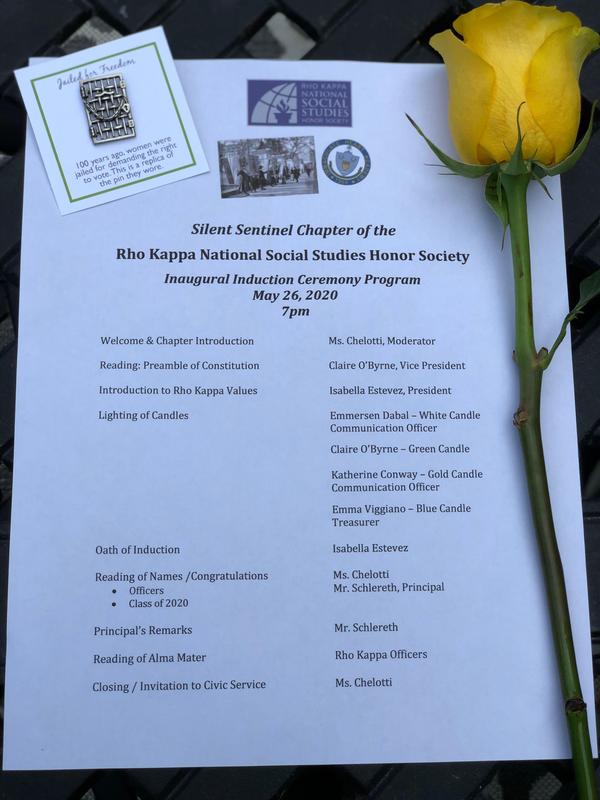 On May 26, 2020, IHA held its first-ever induction ceremony for the Silent Sentinel Chapter of the Rho Kappa National Social Studies Honor Society.

It was also IHA’s first-ever virtual honor society induction ceremony. Held via Zoom, the ceremony welcomed seventeen seniors into the Rho Kappa Honor Society and the five members of the Rho Kappa Executive Board from the Class of 2021.

The students of the Rho Kappa Executive Board, along with Ms. Linda Chelotti’76, IHA Social Studies Department chairperson, planned a beautiful ceremony to honor the inductees from the Class of 2020. The remainder of the membership from the Class of 2021 will be inducted into the honor society in September 2020.

As stated by the National Social Studies Organization, the name of the honor society, “Rho Kappa,” is taken from two words of Semitic origin. “Rho,” comes from “resh,” meaning “head” and “Kappa” comes from “kapf” meaning “palm of the hand.” Together, these words represent the society’s belief that “knowledge without civic service is useless.”

Due to the fact that IHA’s chapter of Rho Kappa was founded in 2020, the Centenary Celebration of Women’s Right to Vote, IHA named its chapter after the Silent Sentinels. This group of brave women fought tirelessly for the suffrage movement. From January 10, 1917 to June 4, 1919, more than 2,000 women protested in picket lines outside the White House. This protest did not end until all women were finally granted the well-deserved right to vote with the passage of the 19th Amendment to the United States Constitution. Many of the Silent Sentinels were jailed for their actions of securing women’s right to vote throughout all elections in the United States.

To remember and honor these women, each IHA inductee received a yellow rose and a pin depicting a jail cell door with a lock in the form of a heart. Both items have historical significance: senators voting on the passage of the 19th Amendment wore a yellow rose to show their support, and the pin is an exact replica of the one given to those Silent Sentinels who were imprisoned as they pushed the suffrage movement forward. As IHA young women, members of the Silent Sentinel Chapter of Rho Kappa swear to always strive to emulate these brave women and never let their voices go unheard.

Welcome to the Rho Kappa Society
Where we honor the women who fought bravely
For your right to vote, for hers, and mine too
All so women under the red white and blue
Could count and be heard just as much as they should
Never limited to housework or motherhood
So come one, come all, come IHA girls
‘Cause if we put our minds to it, we can rule the world!
- Isabella Estevez’21