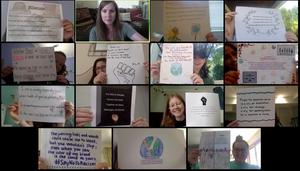 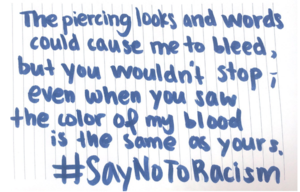 Ms. Bridget Ryan, IHA English teacher, ended the school year with a protest poetry assignment for all of her English III Honors (American Literature) classes. Earlier in the year, Ms. Ryan’s students read Peggy McIntosh’s “Unpacking the Invisible Knapsack” in conjunction with an excerpt from Frederick Douglass’ autobiography. “The goal was for my students to recognize that racism isn’t only individual acts, but a systemic problem,” she explained.

“We finished the year by reading Langston Hughes’ poem ‘I, Too’ and ‘Advertisement for the Waldorf Astoria,’ in which Hughes tackles racial and economic inequality.” Students then wrote their own short poems addressing equality, social justice, human rights, climate change, and more. Here are just a few of the poems about racism, injustice, inequality, and the Black Lives Matter movement. See more on Facebook and Instagram.

“Several girls told me how excited they were about the assignment, and they really rose to the occasion,” Ms. Ryan said. “Their words expressed their genuine concern for their world, and their desire to make a difference. Many of the poems brought tears to my eyes, and I was so glad that we could get together at the end of the school year to do this.”