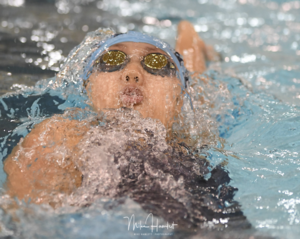 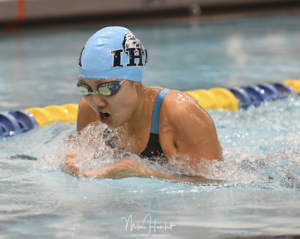 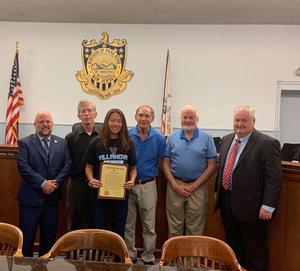 This past summer, one of our fearless juniors had an on-the-job experience that changed her life forever. Working her summer job as a lifeguard at the Park Ridge Municipal Pool, Taylor Whang’21 saved the life of a young man in distress.

Not only had Taylor never saved anyone while lifeguarding before, but she pointed out that a lifeguard usually does not save anyone throughout his or her entire career.

Taylor, a standout on the IHA Swim Team, explained what happened that day. Three young men approached the diving well and one of them went off the diving board feet first. As he moved his arms and legs up and down, he remained two feet under the surface of the water and it looked to Taylor like he was trying to touch the bottom of the pool. “I did not suspect anything until I realized he was not coming up,” she said. “I called for help to the lifeguard next to me who was giving a swim lesson and he got the attention of the pool manager. I jumped in and went under to get him with the lifeguard buoy. I got him and swam him to the surface where the manager and my co-worker were to take him out of the pool. He coughed up water and blood on the side of the pool. Thankfully, no CPR had to be done because I had pulled him out in time. The paramedics and police came and took him to a local hospital because coughing up blood is unusual when saving someone. The whole thing probably lasted no more than two minutes, but it sure felt like a lifetime to me.”

As a way to thank Taylor for her courageous efforts, the borough of Park Ridge recognized her through a formal proclamation on September 24, 2019. The proclamation from Mayor Keith Misciagna and the Borough Council read, in part, “Because of her steadfast efforts, attentiveness, and quick response—along with the pool staff and the Tri-Boro Volunteer Ambulance Corps—the young man was rescued and treated for his injuries.” The mayor and council said Taylor demonstrated “exemplary concern for the life of another” and is a “shining member of the community.”

Taylor said she did not expect any type of acknowledgment because she was simply doing her job. “I feel so blessed to have received recognition for this,” she said. “This also gave me a lot of time to realize how precious life is and that it could be taken away in an instant.”

Very shaken up from the incident, it wasn’t until afterward that she realized he could have died if she had gone in a few moments later and that his life was truly in her hands. “Even though in the moment I thought this was the worst thing possible to happen to me, I am really glad I was there and it was me on the lifeguard stand,” she said. “I have been swimming competitively for eight years and I consider myself a strong swimmer. The 23-year-old man was over six feet tall and it would have been very difficult for someone who was not a strong swimmer to save a grown man in the deep end of the pool.”

Taylor has been competitively swimming since she was seven years old. She has been on the IHA Swim Team since her freshman year, and currently swims for New York Sharks Aquatics. She practices 13-14 hours a week and swims every day. Taylor was chosen as IHA’s Rookie of the Year in 2017-18, was voted NJ.com’s top freshman swimmer the same year, and made Third-Team All-County honors. Her sophomore year, Taylor was named First-Team and Third-Team All-County, First-Team and Second-Team All-League, and she was a member of the 200 Medley Relay team that came in fourth in the state. All of her outstanding swimming accomplishments are in addition to earning a spot on the Honor Roll both her freshman and sophomore years.

Ms. Lia Kunnapas’09, social studies teacher and head IHA Swimming coach, said she was extremely proud to hear that Taylor saved a life this summer while lifeguarding at the Park Ridge pool. “Taylor is a strong swimmer, she has confidence in all she does, and she’s dedicated to her work—all qualities that assisted her in saving that young man’s life,” Ms. Kunnapas said. “Her actions were truly heroic and we could not be more proud of her.”