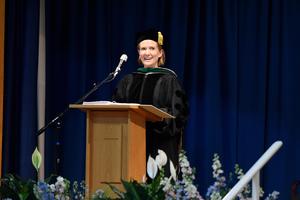 We welcomed Dr. Kasey Regan, IHA Class of 1997, back to her alma mater as our 2019 Commencement Speaker.
During her time at IHA, Kasey was a member of STUCO, serving as class president during her sophomore and senior years, and was an active member of CARE. Additionally, she was a four-year varsity cheerleader, two of those years being at IHA and two of the years at St. Joseph Regional, where she was a captain her senior year.
After IHA, Kasey attended Fairfield University where she was a member of multiple honor societies, including Phi Beta Kappa and the Jesuit Honor Society, Alpha Sigma Nu. She graduated summa cum laude with a B.S. degree in biology and was the recipient of the College of Arts and Sciences Award. She continued her studies at Georgetown University's School of Medicine and earned her medical degree. Kasey became a postdoctoral residency fellow at Columbia University College of Physicians and Surgeons and trained as a resident in anesthesiology at New York Presbyterian Hospital.
Kasey is now board-certified in anesthesiology and working in private practice as the vice director of anesthesia at Vanguard Surgical Center in Maywood. The Regan's love for IHA runs deep, as Kasey is one of many alumnae in her family including her mother, Sharon Calvey Regan'69, and her sisters, Korey Regan'04 and Kaitlin Regan'06. She currently lives in Old Tappan with her husband, John BC'94 and Fairfield University'98, and their many four-legged children.
Click here to watch Dr. Regan's speech from the 2019 Graduation Ceremony.
Print